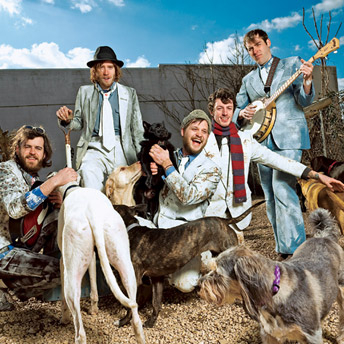 In the past few months some of Giddy Up America’s favorite bands and musicians have released new music- specifically singles off of upcoming albums. Instead of either A) reviewing each individually or B) not reviewing them at all, we (I) thought I’d just do a round up of all of them.

But let’s get dig a little deeper.

Do each of these singles make me more or less excited for the band’s upcoming album? Or even further, do they make me not feel either way?

What kind of mood does each single inspire?

Plain and simple, do I like the song and if so, how much? If not, why?

And finally, how would I describe my overall feelings about the song via a GIF of Flight of the Conchords?

Dr. Dog “The Truth”
Album title & release date: B Room, October 1st
More, less or not all excited for the album: Well, I love Dr. Dog and I thought their last album, Be the Void, was great. So I’d be excited for anything new they put out simply based on their track record. Although this song has kind of a different feel than past Dr. Dog material. When it comes to “different” and “sound” with bands you love, it can either be exciting or effin’ frightening. This slight change in sound makes me more excited.
Mood?: Easy, breezy.
Do I Like it?: I do. It was marginally off-putting at first because it did sound kind of different. But it’s grown on me and now I love it.
Flight of the Conchord GIF:

Kings of Leon “Supersoaker”
Album title & release date: Mechanical Bull, September 24th
More, less or not all excited for the album: Their last album, Come Around Sundown, was kind of a disappointment and when the dust settles on the Kings’ career, will probably be the forgotten album. It was kind of disappointing not because of the songs per say, but because it sounded kind of mailed in. It’s no question that the Kings’ sound has changed/evolved/softened over the years and long-time fans most likely long for the old sound as opposed to the new sound. With that being said, this song should be kind of refreshing. It has the barroom stomp of their first two albums combined with the spit & shine of their post-“Sex on Fire” sound. Win, win.
Mood?: Cruising to the beach.
Do I Like it?: Yes, sir. It’s catchy and driving- two things that defined the Kings for me early on and what made me fall in love with them.
Flight of the Conchord GIF:

TV on the Radio “Mercy”
Album title & release date: ?,?
More, less or not all excited for the album: It’s hard to get excited for something that as of today, doesn’t yet exist as the band hasn’t actually given any news of a new album. The only news is that they’re working on one, which sure, that’s good enough news. “Mercy” sounds tougher than anything that was on their last album, Nine Types of Light. TVOTR is one of the band’s that you just don’t know what to expect from them. That implies mystery. Mystery is exciting. Hence Ryan is excited for a new album, whenever it should happen.
Mood?: Shadow-boxing jam
Do I Like it?: Oh you betcha. My favorite part is the pace of it.
Flight of the Conchord GIF:

Pearl Jam “Mind Your Manners”
Album title & release date: Lightning Bolt, October 15th
More, less or not all excited for the album: It does. Barely any explanation needed. Pearl Jam has been on a roll with their past couple albums, as both Pearl Jam and Backspacer were great, and more importantly, proved that as they celebrated their twentieth year in existence, they hadn’t lost any of their fire. “Mind Your Manners” is a clear indication that the high their on should continue.
Mood?: Fight music!
Do I Like it?: Hell yeah I do. Why? Because it’s a kick ass rock song and I love kick ass rock songs.
Flight of the Conchord GIF:

Brett Dennen “Wild Child”
Album title & release date: Smoke and Mirrors, October 22nd
More, less or not all excited for the album: So first some back story here. I was introduced to Brett Dennen a handful of years ago when he was swinging through Portland on tour and a buddy of mine was tagging along. This was before Dennen became John Mayer’s opening act and the soundtrack to Starbucks across the country. Back then it was just him and a drummer and I was amazed by both his talent and personality. I became a fan and champion of his music. I thought his 2006 album So Much More was great, but more importantly, showed a lot of potential. As a result, I was pretty stoked for his next album, Hope for the Hopeless. While I liked that album, I also thought it poked some holes in Dennen’s armor. Whereas I liked Dennen’s simplicity, I liked that it was simple, but not lazy. Hope for the Hopeless came dangerously close to flipping that script. Subsequently I all but ignored Dennen’s 2011 album, Loverboy. So the question with “Wild Child” is whether or not I like it enough to rekindle my relationship with Mr. Brett Dennen. The answer? Uh, not really.
Mood?: Lemonade-drinking on a deck jam
Do I Like it?: Kind of. It’s actually like lemonade. I like lemonade but I don’t love lemonade. I’d never make a conscious effort to drink lemonade. But if it’s in front of me, I’ll drink it. If this song is playing, I’ll probably listen.
Flight of the Conchord GIF:

Drake “Hold On, We’re Going Home”
Album title & release date: Nothing Was the Same, September 17th
More, less or not all excited for the album: To be honest, I know more about Drake the person than I do about Drake the rapper. And really, the only song I have ever listened to that I know is a Drake song is “Started From the Bottom.” I don’t think I’ve ever listened to that song on purpose either. I’ve only listened to it because my dear friends at Hot 97 insist on playing it three or four times an hour. That’s not saying I don’t like it. I’m fine with. I just don’t choose to listen to it. But this song, I’d choose to listen to this song without hesitation. I’m just not sure that translates to me being legitimately excited about Drake’s new album, though.
Mood?: Some sexy side to side dancing up in this piece!
Do I Like it?: Yup. With a capital yup. The beat is effin’ smooth as the peanut butter I’m about to eat for lunch and it’s such a catchy and easy to love melody. Big thumbs up for this song.
Flight of the Conchord GIF:

Check these songs out here: