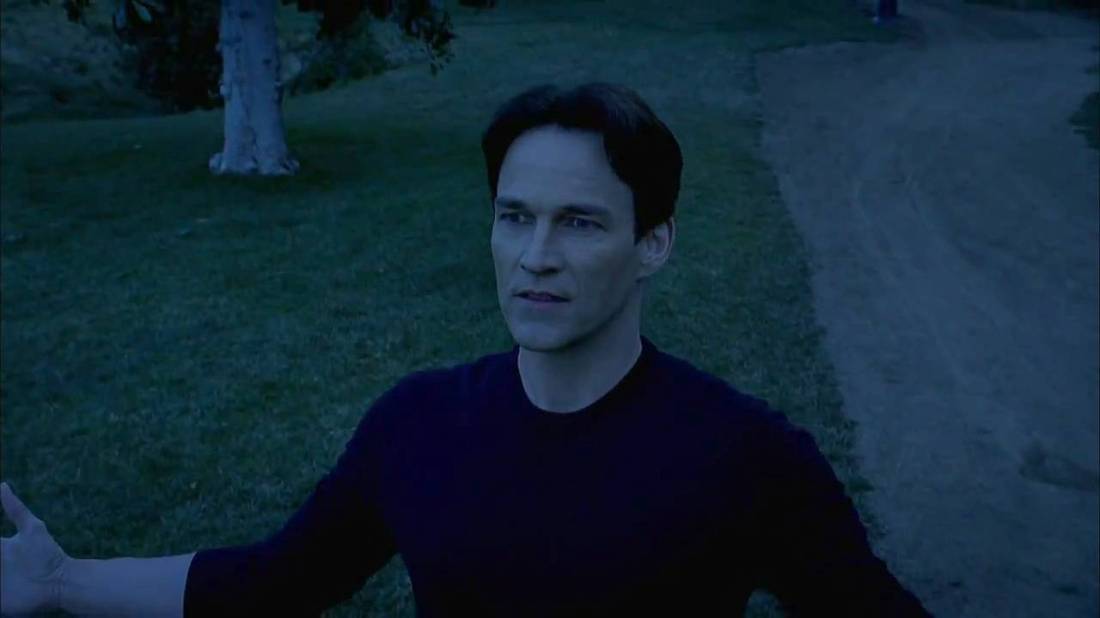 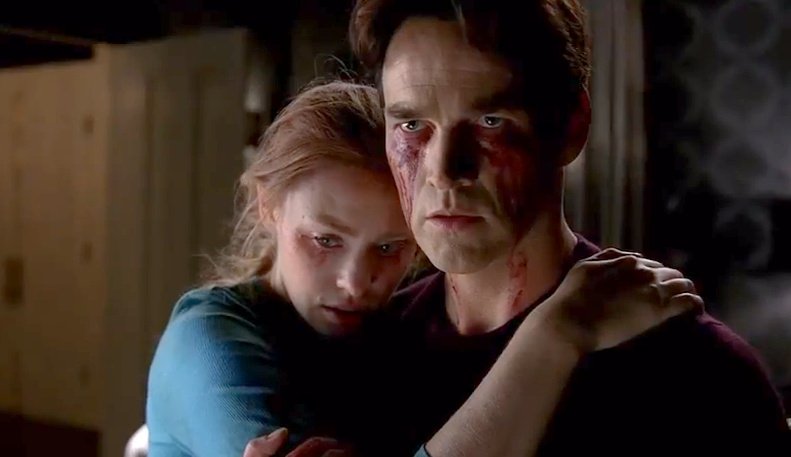 So to start, Eric may or may not kill the Governor’s daughter. At this point, it’s kind of hard to tell. He was going to, but now…

Yes. The Governor of Louisiana. He’s a squirrelly little gentlemen with a shaved head and contact lenses that make him immune to glamouring. Very tricky.

And Bill. Bill might be a bad guy, too.

I thought Bill was a good guy.

He was. That is until he found religion and drank that naked chick’s blood…which was after he killed a couple other people who also wanted to drink her blood because it would make them a God or something. But Bill won and now he’s a super vampire.

A “super vampire”…what does that mean?

He has big ol’ fangs and sees the future and zones out for spells where he then has conversations with the blood-covered naked chick, who is no longer covered in blood or naked. But he still does stupid Bill things- like think he can walk in the sun, only to quickly find out that he can’t.

Nope. He starts burning up but he gets back into his house in time. It was a close one. He thought he’d be good to walk in the sun. He was wrong.

Maybe. I’m not sure. It’s hard to tell what he’s up too. He keeps talking about saving vampires and sent Jessica to seduce an Asian college professor.

I’m not sure. But she looked cute while doing it. Oh, and she might die soon.

The Asian college professor kills her?

No. Bill had a vision…because he’s a super vampire…and in his vision, he saw her with some other vampires being burned by the sun. He’s been very shook up about it. He really thinks he’s a god a now. Which he might be and as a result, is responsible for keeping all the vampires alive.

That sucks that Jessica dies.

Agreed. Not a given yet, though. Bill also was convinced he could walk in the sun and that was wrong. Super vampire, but still not super smart.

So wait…why does Eric have the Governor’s daughter?

Oh, yeah. Because the Governor is essentially declaring war on vampires because his wife cheated on him with a vampire. Kind of petty. But oddly enough, his daughter already kind of looks like a vampire. She’s very pale. And she totally has the hots for Eric. But Eric will have none of it. He’s all business.

Does he know Bill’s a super vampire?

Eric? Yeah. He and Sookie tried to kill him. It didn’t work.

Did Sookie blast him with her fairy powers?

No. She staked him.

Nope. Super vampire. And this dude Warlow is a super vampire too. And also super old. Has a big beard and is in town to kill Sookie.

Sookie is not just a fairy. She’s fairy royalty and her great grandfather or something like that, promised her to Warlow. So her great, great grandfather is in town to protect her and eat pasta with Jason. He’s the king of the faeries and super old. He’s been hunting Warlow for centuries. Warlow killed his family.

So Warlow is this season’s bad guy, then?

I don’t know. He’s definitely one of them.

Along with the governor and Bill?

Is Alcide still around?

He is and he’s kind of a douche now. He’s basically in some kind of werewolf trailer park, having threesomes, chilling with his dad and hiding Emma.

Yes and she was sexy, hot. But now she’s dead after shifting into that gay pastor. Steve something.

Newland or Noonan or Newlin.

One of those. That dude’s in vampire jail.

The Governor set it up. They perform experiments on vampires. Steve’s ex-wife works there.

So, there’s a vampire jail and Bill is a super vampire, but another super vampire is in town and that super vampire wants to kill Sookie. And at the same time, Eric has kidnapped the governor’s daughter, who kind of already looks like a vampire, and is…wait, so what is Eric doing again?

I guess he’s declared a war against humans, who have already declared war against vampires. This all started last season- part of all that Authority nonsense that was kind of confusing. Now it’s in full swing, led by the Governor. Eric is fighting back.

Kind of. Pam and Tara have mostly just bitched, complained and drank milk this season.

What about Lafayette? Is he still around?

Yes. But all he’s done so far is baby sit Emma for Sam before Alcide came and took her. And I don’t totally understand that whole thing with Alcide and Emma and Sam. They’re worried because people are out to get Emma, but they’re not really saying who these people are. I think they just need something to be worried about because True Blood is essentially just a whole show comprised of people in trouble. Oh yeah, the cops…I think that’s who they were…came looking for Emma. So maybe…you know, I don’t know what the hell is going on there.

I feel that could be the name for the show, I Don’t Know What the Hell Is Going On.

We haven’t even talked about Sheriff Andy and his fairy kids. Or Jason. Or that new fairy dude. Or Jess from Friday Night Lights.

Cool. Good talk, see you out there.