I have been a fan of England’s soccer team for almost a month now. I can fully admit that this is not a long time. I can also fully admit that my allegiance to England is based in no small part to America’s absence in the 2018 World Cup. If the U.S. team had been able to qualify for the tournament, regardless of how bleak their prospects would have no doubt been, I would have been all in with them. But with the U.S. not involved and with the World Cup being one of my favorite sporting events out there, I wanted a team to root for. It makes everything that happens during the month or so that the Cup is happening that much more interesting if you are invested in one of the horses in the race.

Now as we head into the semifinals, my decision to become an England fan has proven to be a good one, as they are just two wins away from winning their first World Cup since 1960 something. I don’t know exactly when they last won. I have only been an England fan for a short time. I believe I mentioned that. But it was in the 1960’s. That was a while ago. So long ago actually, that if they were to win this year, you could say that they ended a sizeable drought when it comes to winning World Cups. Any time a team is able to crawl their way out of a title-less drought, it is always a good thing. That right there is a scientific fact.

This inability on my part to not accurately state when England last won the World Cup does expose a glaring weakness in my fandom. I’m not an especially well-informed fan. At best, I have a working knowledge of the England soccer team, but there are blind spots. Blind spots will be there when you’re new in town, which I am. I just moved in; haven’t even got all my utilities sorted out yet. I still have to write my address down or else I’d forget it.

You get the point. I know a little. I definitely don’t know a lot.

It’s not like I don’t know anything about my new favorite team. I know some things. I might not know a lot about these things or specifics about these things, but I know some things. If this tournament was a few weeks longer, well I might know a few more things. But it’s now closer to the end than the beginning and with that being said, I feel like what I know now about England is most likely what I’ll always know about England and I’m cool with that. 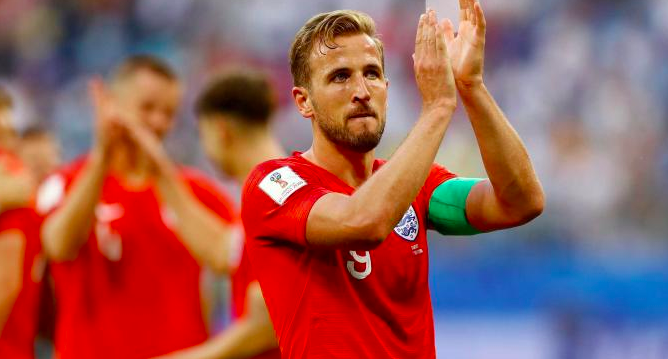 I know England is led by this dude Harry Kane. He wears number 9 and plays for Tottenham. The Hot Spurs! Take that San Antonio and your regular spurs.

Remember when you first heard the name Benedict Cumberbatch and your first thought was that it was the most British name ever and then you saw him, and it made so much sense that not only was his name Benedict Cumberbatch, but of course he was this bomb ass British actor? Harry Kane is the soccer equivalent of that. It all makes perfect sense that a dude named Harry Kane, who looks like the way Harry Kane looks, is the current face of British soccer. England, as a country, understands casting better than anyone else.

I know England goes by the nickname “The Three Lions.” I mean, I don’t know why, but I have taken note of this being mentioned frequently by commentators when watching their matches. Could I look up the background and history of the nickname? Of course I could. But you know, I just…well, I haven’t. I could even do that right now instead of typing these words, but I could be doing a lot of other things right now instead of typing these words. Long story short, they go by The Three Lions, I don’t know what that means and as of right now, I’m fine with that. It’s sweet nickname, though.

I know England has this guy named Trippier on their team and if you told me he once pulled a knife on someone or had been in at least a dozen bar fights, I would totally believe you. He has a first name. I don’t know it. He might be my favorite player.

I know England’s goal keeper looks like every other word out of his mouth is “fuck” when he’s yelling at his defense during a match. No clue what his name is, but I would be concerned if he was out on the sun for any length of time without having applied sunscreen. My dude is super white.

I know that if I were to again bring up Mr. Cumberbatch, it’d be because if that dude has the most British name ever, than England’s manager is next up in second place because Gareth Southgate is a super British name. Gareth Southgate sounds like the made-up name of an American sent to England to infiltrate Parliament or the name of a character playing a prick British musician in a drama about struggling theater kids in the West End. Gareth Southgate might have been the name of the butler who killed the maid with the candlestick in the billiards room. Gareth Southgate disapproves of every single thing you do because he’s Gareth Southgate and you can never live up to his standards.

I mean, just look at this dude.

I know that there’s a dude named Dele who really only goes by Dele even though it’s his first name and in the team’s last match versus Columbia, in the match’s final minutes, with Columbia desperate for a goal, a sub came in for Dele, although Dele seemed unaware that the sub was for him and needed to finally be told by the ref. Now he could have innocently been oblivious to the fact that he was being taken out of the game, but I don’t really think so. I think it was some clever gamesmanship and I respected the hell out of it. Dele might be my second favorite player.

I know that a fella named Rashford plays for England and he’s gignatic and a guy named Jesse also plays for the Three Lions and he is sprightly. Oh and England has a bloke named Maguire on their squad.

And finally, I know England calls soccer football and me having called England my new favorite soccer team is a disgusting slap in the face. I apologize for this. But I’m also American and here we call it soccer, so cue up the shrug emoji because I’m not calling it football. We already have football. We just don’t have a soccer team in the World Cup.