Home › Television › My One Issue With ‘Westworld’ Right Now

My One Issue With ‘Westworld’ Right Now

I’m cool with Westworld. I like it as a television show and have reached the point where I legitimately look forward to watching it on Sunday nights. I appreciate the way it sometimes makes my brain hurts. I also enjoy a good Westworld deep dive following each episode, whether it’s reading about the episode and possible theories related to said episode or listening to a podcast entirely devoted to gauging whether or not a particular Reddit-based theory about the show is plausible or not. Westworld is just one of those shows that comes with required reading and I am fine with that.

This season has been an improvement on the first season thanks in large part to more action and at least a few answers to the many questions the show has laid out there. This week’s episode in particular, “Akane No Mai,” was especially thrilling, mainly because we finally got to swing by the long-awaited and heavily-anticipated Shogun World.

Shogun World: it’s like Westworld, but with one small exception.

I’m not entirely sure what the difference is. Eh, I’ll Google that later. The point here is that Westworld has now shown us three of the six parks that exist. Westworld, The World With Elephants and Stuff and now Shogun World. And while there was a lot to take in throughout “Akane No Mai,” including the revelation that certain characters exist in each park and that the robot uprising isn’t limited to just the Westworld Park, I do think we are all missing something here. 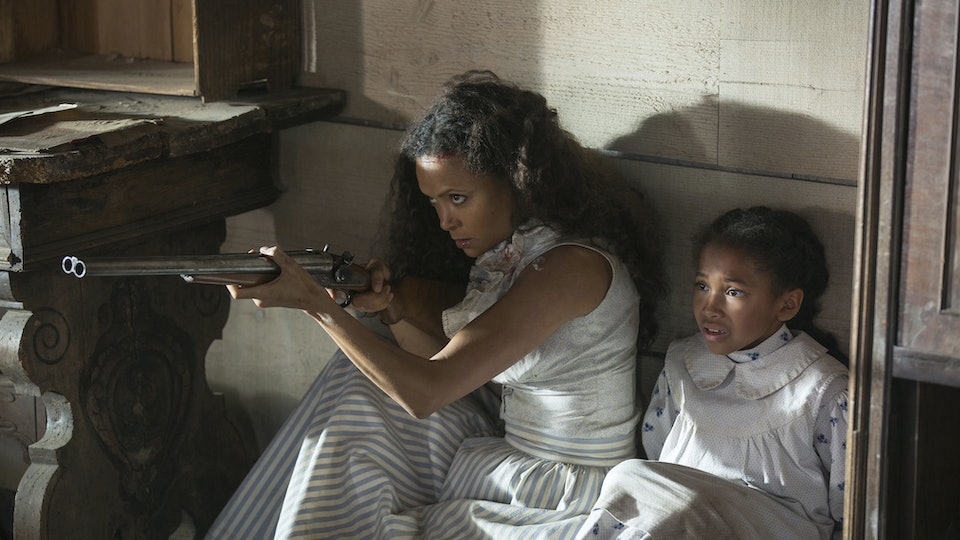 We were introduced to Shogun World via Maeve’s Posse, who came across a gang of samurai in the woods, were taken captive and then brought to the Shogun World version of Sweetwater, the town where the bulk of the action over in Westworld takes place. Maeve’s Posse didn’t intend to go to Shogun World though. No. Their intended and stated mission is pretty clear and straight-forward. They want to find Maeve’s daughter.

But this is where I get hung up.

Team Maeve is looking for Maeve’s daughter, but isn’t Maeve’s daughter in Westworld? I mean, if she’s even still there and hasn’t been decommissioned or maybe even now part of Delores’ army? She could be in that lake with the other dead hosts for all we know. Regardless, when Maeve elects to ditch her escape plan and go and rescue her daughter, all she knows is that she’s somewhere “out there,” “out there” being out there somewhere in Westworld. Until this past week, Maeve didn’t know of a world outside of Westworld, so when she says “out there,” she can only be talking about the only “out there” she knows.

So what the hell are they doing in Shogun World? Is Shogun World that close to Westworld that one minute you can be rambling around the dusty trails of the old west and the next minute, be one click away from a Shogun encampment? I have never really understood the logistics and geography of all of these parks, but I suppose I always assumed there was at least a little distance between them. Although at the beginning of episode three, when we were introduced to The World With Elephants and Stuff, the mystery lady who turned out to be the Man in Black’s daughter ran from one park to the other, from The World With Elephants and Stuff to the lake in Westworld where she was attacked by tiger.

Is that small little mountain range there all that separates The World With Elephants and Stuff and Westworld? Is there a similar geographical boundary that separates Westworld and Shogun World?

Okay, now this is getting into a dust-up about logistics and that’s not a dust-up I want to get too involved in because if I do, I might never return. But really, if you’re in Shogun World, how do you not hear a stray gun shot from Westworld? That seems problematic, especially when it comes to immersing yourself in that particular reality, which seems to be the allure of any of these parks. It’s like one time I went to the movies, maybe it was Jurassic World, and while we were in the theater, there was a wicked thunderstorm happening outside. It was so loud that you could hear it above the sound of the movie. Really messed with you a bit and threw off the natural feeling of escapism that comes with going into a movie theater. This is like, totally the same thing.

But back to my original point, where the hell is Maeve’s daughter? Do they have any idea or are they just roaming aimlessly? It sure seems that way, which is how they accidentally ended up having a sleep over in Shogun World. And while we’re on the subject, how effin’ big is Westworld? They go on horse back rides that takes days and Team Dolores needs a train to go rescue Abernathy. I’m really interested to know what kind of square footage we are talking about here.

Don’t get me wrong. It was pretty great seeing Shogun World, but I think how we got to Shogun World is a little problematic and has been largely overlooked because of how super cool it was to finally see samurai fights and a dude getting his head lopped off and hearing “Paint it Black,” but this time, with a Japanese twist to it. It also hints at a larger question when it comes to Maeve and that is, what does the future look like for Maeve? Is she ultimately headed on a collision course with Dolores or are the two of them destined to be operating on separate tracks? It certainly seems that way, but it’s become a little harder to envision a point where something like that could happen, especially with Maeve bouncing around the different worlds and Dolores gearing up to embark on a rescue mission of her own.

Although if Westworld has taught us anything, it’s that when it comes to this show in particular, predictions are a fool’s errand.

Oh and that the person next to you might be a robot.