Home › Game of Thrones › GoT Plot Line Power Rankings: ‘The Spoils of War’

GoT Plot Line Power Rankings: ‘The Spoils of War’

We were having dinner last night, a lovely summer evening and we were eating outside. Our daughter had a slice of pizza in one hand, a matchbox car in the other. Our dog was keeping an eye out for squirrels. It was around this time that I casually mentioned to my wife that I thought that the episode of Game of Thrones we’d be watching later on might be an anti-climactic one, one of those middle of the seasons, people-mover episodes Game of Thrones does every season. Yes this is shorter season and every second counts, but nonetheless, it just felt like a possibility, especially with “The Spoils of War” running only 50 minutes, the shortest episode of the series to date.

In related news, my predictions are more often than not pretty fantastically wrong.

“The Spoils of War” was a people-mover, but only in the sense that it featured people moving the hell out of the way of Daenerys and her dragon as they laid waste to the Lannister army. Even up until the sound of the stampeding Dothraki were heard over the roaring hills of wherever the hell they were in Westeros, the episode was a good one. The list of great Thrones’ episodes consists of episodes that were great from beginning to end; their back end didn’t carry all of the weight as they marched towards greatness. There’s a very good chance that “The Spoils of War” could end up being a top 10, maybe even top 6 or 7 episode, once everything is said is done.

In honor of Danys doing Danys stuff, here is our song of the week.

On to the power rankings! 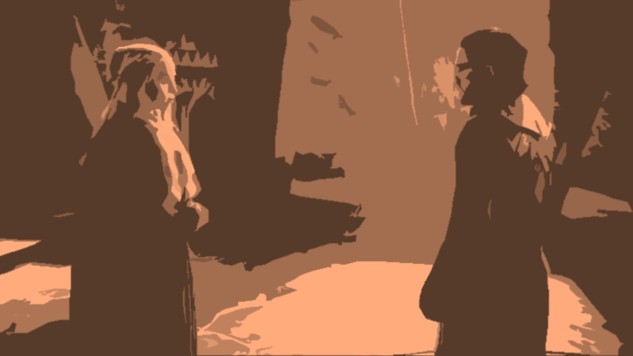 Team Dragon grabs the top spot for the second week in the row and holy smokes, they grabbed that shit by the ashy coconuts. The only way to unpack is to do this in pieces.

Before getting into battle mode, Danys and her nephew/potential lover…yeah, I said it. How could you not! Did you see the way they were looking at each other??? Talk about something burning, huh?

Yeah, sorry about that. It’s Monday.

Anyway, as Jon and Danys walked lovingly through the cave together, we see not only a boatload of wonderful dragon glass, but some super convenient cave paintings that help Jon illustrate his point about the need to work together better than he would ever be able too. Jon should have really incorporated visuals from the get-go. A good Power Point presentation can really help make things easier.

Yet Danys is still hung up on this “bend the knee” thing and I’m going to be honest, this really seems like it could become a thing sometime soon. Of course her argument for why Jon should just effin’ do it (don’t let pride get in the way of saving your people) all but echoes exactly Jon’s argument to Mance Rayder back when Jon was trying to negotiate a truce between the Wildlings and the Night’s Watch. That seems to have worked out pretty well. Jon saved a bunch of people, got a new BFF in Tormund and some helpful allies in the upcoming battle royale with the Night King and his army of the dead. Pride is a tricky one though, so is loyalty. It’s going to be super tough for Jon if does bend a knee to Danys and then heads home with piles of dragon glass in one hand and a picture of him bending a knee in front of Danys in the other. I’m not sure Davos has the PR savvy to navigate that one.

Speaking of our boy Davos, that dude has become straight up goofy. He’s out there making jokes, trying to talk chicks with Jon and maybe, kind of, at least a little bit kicking some game to Missandei. Davos, get your head on straight sir. Zombie army Davos! Zombie army.

Things were already interesting on Dragonstone and then they got really interesting. First Danys received another bummer of an update about her battle plan, chalking up another L, and then had to be talked out of flying straight for King’s Landing and burning her way to the Iron Throne. I for one, liked when she turned to Jon and asked for his advice. And Jon had good advice, advice he should maybe tell himself as he looks in a mirror one night. Jon needs to read a self-help book or two, gain some self-confidence. Jon has more than enough belief in his mission, but I think he needs to build up some belief in himself. Also, I would definitely tell the story about how he literally died to save people a bit more. That’s a message people could get behind.

As for the last quarter of the episode, it was a lot to take in, a lot to think about. It was definitely wild to see a dragon in action because I don’t know about you, but I’ve never seen a dragon in action. We don’t have dragons in Maine. Or in any place I’ve lived actually. But either way, it was cool to watch, even though anytime Danys is riding a dragon, my wife is quick to point out (accurately) that it does kind of look like a scene from The Never-Ending Story.

From an emotional stand point, I wasn’t the only one feeling a little bit conflicted while watching it, as Tyrion definitely looked a little shook. I don’t know why exactly – if it was the sight of his brother fighting for the other side or the sheer savage carnage he was witnessing, sheer savage carnage created by Team Dragon. Jaime looked shaken too and I honestly think it’s because it was just a different kind of savagery than they are used too. Wars are commonplace and with it, dudes with severed limbs, etc. Jaime is definitely used to that. But neither Lannister had ever seen dudes straight up burning alive like that. It was another level of warfare that was foreign to them, literally, especially when you talk about the Dothraki. It’ll be interesting to see how Tyrion goes forward and whether or not, as the preview seems to indicate, he’ll try and bring Danys up to speed as to how things are played in the civilized war.

Another reason why Tyrion looked so troubled was that because he too was conflicted seeing our boy Bronn on the other side of the field. We can cheer on Jaime, but there have also been times when we hate Jaime. That hasn’t been the case for Bronn. He’s been a net positive from the jump and then all of sudden we have to choose between him and Danys. That was tough business man.

Winterfell is all about family reunions these days. Last week Bran returned from his study abroad semester up north and this week, it’s Arya returning. The coolest part of her whole return was when she was our P.O.V., as the camera panned around Winterfell. Seeing Winterfell through her eyes, subsequently remembering the Winterfell from season one was a trip, and even though we don’t need it, was a reminder of how much things have changed.

All three of the Starks have changed and it was interesting to see Bran, Arya and Sansa catch up. There were traces of familiarity, but the experiences they’ve had in the time since they were last together hung heavy over the conversation. I feel like we’re all a little Sansa here – her little brother is back, but he’s a little “touched” as they used to say and her little sister is back and she’s out there getting the best out of Brienne in sparring practice. Talk about being shook.

Good God can he just die? He’s gone head first into Frustration Town and we just need him gone. Please. Please Game of Thrones, just kill him off. We know he’ll probably get got by that dagger that was making the rounds in the episode. Can we expedite this please? PLEASE!

3. Keeping Up with the Lannisters

Let’s just get this out of the way now…Jaime isn’t dead. Settle down Esquire. We all know that come next week, we’ll see Bronn swim down to Jaime, help him out of his armor and the two will swim to the surface. Then they’ll either be taken captive by Team Dragon or find that everyone has rolled out and they’re left to their own devices.

We also all know that Jaime is currently the most likely candidate to take down Cersei and to do that, a wedge needs to be lodged between them. Could that wedge be Cersei’s first major defeat as Queen of Westeros? They said the gold had already made it to King’s Landing, so that’s something. But it also looked like Danys torched a lot of the wagons of food, something else King’s Landing badly needed. We saw Cersei look down upon Jaime before, when he had the audacity to get captured and his hand lopped off. Could it happen again?

4. The One Where…Ugh, Freakin’ Theon

When reached for comment, Giddy Up America had none.

Like Loading...
‹ The Yankees Are the Yankees Again (and That’s Good for the Red Sox)
So… ‘The Bachelorette’ Final Was Weird ›