The Bachelor Recap: Week One

I don’t know what the rest of 2017 has in store for us, but regardless of what happens, at least we have a new season of The Bachelor to keep us warm and cozy. That’s enough for me. Although to be fair, I’m easy to please.

At the center of the storm this season is our good friend Nick Viall, a dude who went from That Emo Guy to that Asshole Dude to that Sneaky Son of a Biscuit to Hey, He’s Kind of Cool Actually in a matter of two seasons of The Bachelorette and one run on America’s treasure, Bachelor in Paradise. Nick was a surprise pick for the show, seeing as how he’s definitely been there, done that, but also because he’s 36, which in Bachelor years puts him in line for an AARP card and senior citizen discounts at the movies. Seeing as how the show regularly trots out ladies in their early twenties who have already given up on the idea of finding true love, the age issue could definitely become, well, an issue. I mean, who cares about Nick finding true love. The Bachelor has a farm system to feed. It needs some fresh fish to keep the stream populated and the Eco system cooking. Lucky for us, the show has assembled a delightful mix of young and “old,” so let’s do it to it!

The first episode of the season, whether it’s The Bachelor or The Bachelorette, is split between a bio package of the hunted and a few select clips of the hunters and then the always entertaining limo introductions and initial meet & greets. With Nick being someone everyone is pretty well familiar with, it allowed the show to role out more features on the lady-testants.

There’s Danielle L, who runs three nail salons in California, making that five assets she is incredibly proud of and excited to show off.

There’s Corinne, who will make you admire her maturity when she talks about running her dad’s “multi-million dollar company,” then retract said admiration when she gushes about her nanny.

There’s Raven, who most likely finds Friday Night Lights a little too biographical and there’s Taylor, who like any of us, goes for jogs in a bikini. Josephine is a nurse, but I’m sorry if I thought she was a nurse you call when you’re hosting a bachelor party and there’s Alexis who, well, we’ll get to her in a few.

Limo introductions are pretty much a lose/lose situation. It’s like hosting an awards show. We’re only going to remember you for your failures. In this case, we’re only going to remember the terrible, terrible attempts at jokes. Puns died Monday night on a cool California evening outside a fake mansion, lit with candles and twinkle lights. Puns were 130 years old, give or take a century. I’ll miss you, Puns. We had some fun together.

Here’s a list of limo intro talking points, if for some reason you didn’t watch the show, but find yourself in a conversation about it today at work.

The gal from Alaska gave Nick an Eskimo kiss. It was adorable. But she’s gone.

Taylor told Nick her friends thought he was a dick but was a little slow in the expected follow-up where she says that no, it’s her friends that are dicks and Nick is just misunderstood.

Danielle L has nice boobs. No really, just mention that at some point and everyone will just nod in agreement.

Two ladies spoke a foreign language and spoiler alert, one of them is totally going to be in the top three when the dust settles. (Hint: she spoke French, is from Canada and her name is Vanessa.)

Jasmine G…yes, there are two Jasmines, brought out the one and only Neil Lane and had Nick pick out a ring. Now go back in your hole Neil! We’ll see you in a few weeks you slimy bastard.

And finally, there’s Liz the Doula from Vegas. Liz has a secret and no, it’s not what happens out in the desert surrounding her hometown. Liz and Nick met at the very well filmed wedding of Bachelor super couple Janner (Tanner & Jade.) They laughed, they danced and then they did the dirty dirty. Yet when Nick asked for Doula Liz’s digits, she politely declined. This was pre-Bachelor in Paradise, back when Nick had a reputation on par with a foul-smelling dumpster diver. Now whether or not her opinion of him truly changed after the show or she simply wanted to get in on some of that sweet Bachelor-alum social media sponsorship cash, Liz had a change of heart and hence, here she is much to the quasi-displeasure of our boy Nick. It’s cool though. She promised to keep their past a secret from the other woman, so of course there’s no way anything could go wrong there.

After limo introductions, Nick is thrown to the wolves, left to fend for himself with nothing but a tumbler of confidence juice and a limited arsenal of small talk. Corinne with the Nanny gets dibs on first kiss and is totally going to be the villain and gone by the end of February and God bless Alexis.

* it was a shark costume

Alexis ended up getting a rose. So did Corinne with the Nanny, which was a relief to anyone who even remotely cared about Nick because if she hadn’t gotten one, Nick’s life may have been in danger. Corinne with the Nanny doesn’t seem like the kind of gal who takes rejection with a smile. Eventual winner or at the very least, eventual runner-up Vanessa got a rose, but not the first impression rose as some in my house thought. That rose went to Rachel, who is this season’s Woman Who May Be Too Good For This Show But Gosh Darn We Love Her Just The Same. Making Nick eat a raw hot dog didn’t stop Nick from giving Josephine a rose and Raven from Friday Night Lights also got a rose and I’m going to be honest, I kind of like Raven. I could see her providing some pretty entertaining commentary until she’s eventually sent home. 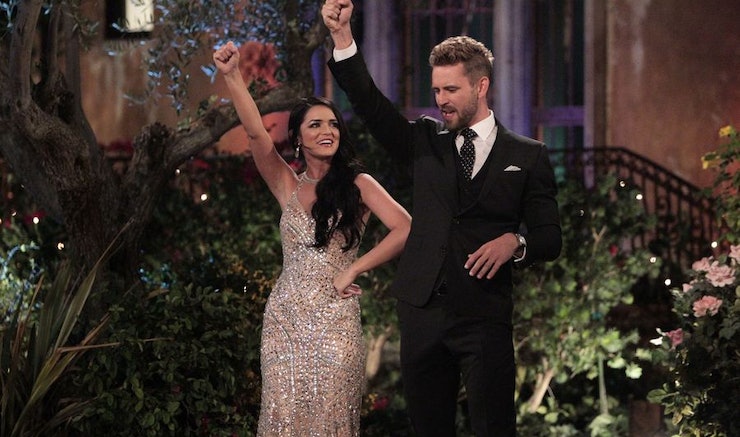 Kept Around for Entertainment Value:

See you next week!