Congratulations are in order. We have not only reached week eight of season 19 of The Bachelor, we’ve reached Hometown Dates.

How the hell have there been 19 seasons of this crazy ass show?

Well for starters, Hometown Dates are pretty self-explanatory. It’s obviously when the bachelor visits the home towns of the girls who have survived up until this point, has uncomfortable conversations with those lucky ladies’ families and tries to downplay the whole “dating multiple gals at once on national television” thing because for some reason, fathers tend to not be all that cool with that. Hometown Dates also means we’ve hit the point of the season where the weak have been weeded out, the crazy sent packing and in their stead, we have drama and awkwardness as the reality of how eff’d up the whole idea of the show becomes harder and harder to ignore.

I’m really starting to have strong feelings for him, Girl A says.

Oh, that’s great. Me too, Girl B replies.

Yeah, me too. Isn’t he wonderful? Girl C adds.

To which they all stop and think- Oh, this sucks.

But that painful and moderately entertaining realization hasn’t totally reared it’s ugly and makeup covered face yet. So let’s back track and do some quick catching up on this season.

First we have the bachelor, Farmer Chris from the great state of Iowa. You know Iowa, lovely state to drive through, has the largest truck stop in the country, home of corn and farmer stuff. If you didn’t know already, Farmer Chris is…wait for it…a farmer. A corn farmer. And even furthermore, Farmer Chris is very into being a farmer. Back when he was on The Bachelorette it was only touched on that if Andi (i.e. the all-powerful, Juan Pablo-destroying, thug-busting attorney from Hotlanta) picked Chris, then she was also picking a life in Iowa. Needless to say, Andi did not pick Chris because Iowa just couldn’t withstand the dynamism that is Bachelorette Andi. Oh, and she wanted no effin’ part of living on farm. Andi saying that she’d love to live on a farm and open up a small law practice in town is the equivalent of Olivia Pope’s jam fascination- an unbelievable leap of logic & reason.

Being rejected by Andi the Great is what led to Farmer Chris’ new gig as the bachelor. Great. He got some new clothes, a new hair cut, a new best friend in Chris Harrison. One thing not new however? You guessed it. Farmer Chris ain’t leaving Iowa. You want a piece of Farmer Chris, then you better want a piece of blissful mid-western living because that’s what you’ll be getting. The two are a package deal. It’s like when you get the Triple Play from Comcast. You have no interest or need for the phone but it lowers the cost, so you get it anyway. The only difference is that you can forget your phone number, but you sure as hell aren’t forgetting that you live in Iowa.

Maybe it’s just me, but it seems just a little insensitive and kind of hugely chauvinistic of Farmer Chris to not even take into account his ladies’ current plot in life when selecting a mate and even considering that she might not want to give that life up. Becca for instance, the current favorite of the O’Connells, lives in San Diego. San Diego- also known as one of the greatest places in the world. But tough shit Becca, if Chris picks you then you can say adios to the Gaslamp district, the suddenly interesting Padres, palm trees and you know this…

And say why hello there to this…

But that’s not even the point here. Wouldn’t the right thing for Farmer Chris to do, especially if he legitimately cared about one of these gals, is wait before making a decision about where Lucky Lady Winner and him set up camp for the rest of their life? I would think you’d want to make sure your wife is on board with things and had a say in the matter. Farmer Chris doesn’t seem to into that. And frankly, I think that’s kind of a dick move. No wait…it is a dick move.

Enough about Farmer Chris. He’s boring, kind of an idiot and possibly a mimbo. Let’s talk about the ladies.

For the most part, the ladies have been…okay. There’s definitely one or two front runners, one or two on the outside, one dark horse. But does anyone really care who actually wins these things? This show has a batting average so low it’d be in Single A ball, being told to think about either becoming a pitcher or something in another profession. So whatever, I’m not getting into the front runners. But I will say I’m currently Team Becca, but I’m also Team Kaitlyn. So I guess I’m ultimately Team Undecided.

This season was starting to look relatively drama free, which was a bummer and had my interest level at fleeting at best. There were a few drunk gals, but drunk ain’t drama, drunk is just drunk. But things got cranked up a notch to crazy town when Kelsey decided to make her move. And what was her move? Oh you know, just casually exploiting the death of her husband eighteen months ago. You might think that’s a tad bit tacky, but not Kelsey. She thinks it’s a big bit of amazing and in doing so, made our dog Lucy question out loud if Kelsey actually killed her husband. She didn’t. But she might have. No! Well…maybe. Come on. No you come on!

Anyway, Kelsey is apparently in a league of her own and better than the other girls…according to Kelsey. She feels this way because she uses big words and is all smart and shit. She actually referred to herself as being “blessed with eloquence” which is really just a fancy way of saying “I’m obnoxious and rock the shit out of my word a day calendar.” Good for you. And her husband died. She mentioned that occasionally and because she hadn’t really had a chance to drive that point home, crashes Farmer Chris’ alone time and unloads on him. They make out, she’s feeling pretty good about herself. She’s feeling so good that at the Rose Ceremony, when Farmer Chris needs a moment to collect himself (and possibly also wonder if Kelsey killed her husband,) she elects to speak for him. This goes over well. Everyone likes being talked down to, right? I don’t know, I could be wrong about that. However, sensing trouble and a change of wind direction, Kelsey calls upon the God of Bachelor Panic Attacks and ends up on the floor. Did this make me think that the next time things get tough at work I should fall on the floor with a “panic attack?” Maybe.

Fast forward and there’s the Battle in the Badlands, where two women enter but (presumably) only one will leave. It’s Kelsey and Fake Eyelashes Ashley, who harbors legitimate dreams of being a Disney Princess. These two lucky lasses get whisked away on a helicopter, do a drive by of Mt. Rushmore before ending off in what could only be described as the That Time the Interns Had to Plan a Date and Thought Using That Old Futon from the Warehouse Would be a Good Idea.

Last time the Interns are given that kind of responsibility! Cute bedside table, though. Is that from Pottery Barn?

A rundown of what happens… 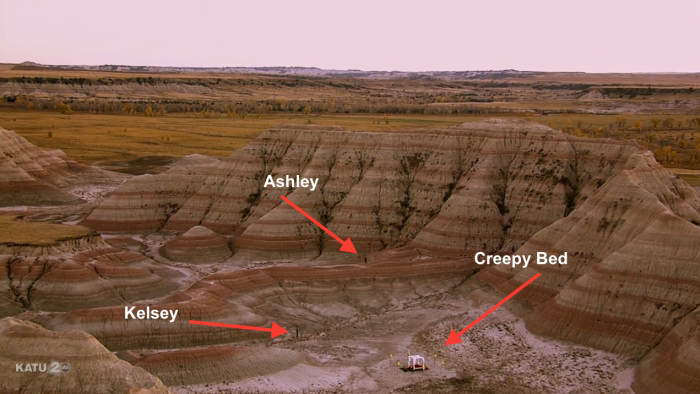 Now quick, lighting round of the rest of the action!

Britt seemed to be the favorite. Britt seemed exist in a perpetual state of done-upness. Britt seemed to be destined for life on the farm or life as the next Bachelorette. However, that was until Britt slipped out of first place and lost front-runner status. She didn’t handle it particularly well and by particularly well I mean pretty effin’ badly. She kind of handled it like this was real life which is a total rookie move. The Bachelor isn’t real life, Britt! I don’t know what should have made you realize that first? The helicopter dates? The swanky accommodations? That time when you drove a tractor in a bikini through downtown L.A.? Come on, Britt. I thought you knew how this game was played. You disappoint me. And you disappointed Chris, who gave you the boot.

Speaking of boots, Jade had come on as a favorite in recent weeks. But then Jade and Chris’ relationship hit a bumpy patch called I posed nude for Playboy that ended up in Jade hitting the bricks. You’ll be seeing Jade again as either the next Bachelorette or washed ashore on Bachelor in Paradise.

So that leaves Becca, Kaitlyn and Ashley left to battle it out for Chris’ corn-loving heart and win a lavish corn-filled lifestyle. Man, I bet Chris loved Interstellar.