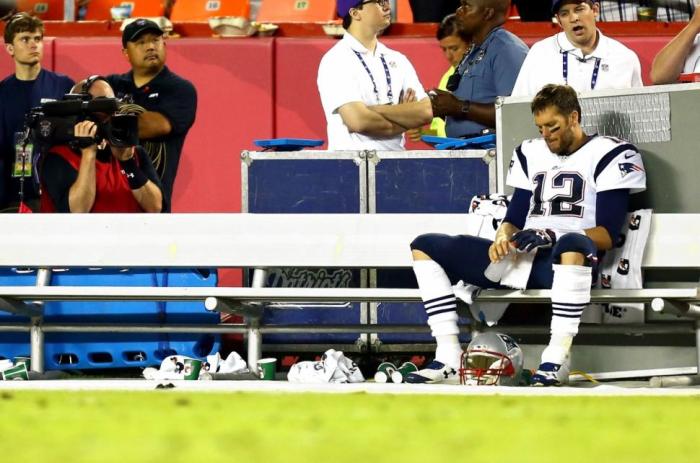 No one likes to see their friend in a bum mood. We want to cheer them up, lift their spirits. Maybe make them laugh, tell them a joke- something stupid like why did the kid cross the playground? To get to the other slide. Buck up buckaroo! Everything is going to be A Ok! Seeing a friend depressed, down on their luck and mopping around like someone punched their adorable little puppy right in the kisser is as much of a buzzkill for us as it for them. The best of friends are empathetic to a fault. Their pain is our pain.

And this is how I currently feel about my dear friend Thomas Football Brady. Ol’ Tommy Blue Eyes is in the middle of a rough week, thanks to the hellacious shellacking he and his fellow Patriots endured this past Monday at the hands of the Kansas City Chiefs.

Are the Pats done?

Is the Patriots dynasty over?

How much is too much to blame Gisele for?

These questions have been clogging up Twitter feeds, Facebook feeds, lonely MySpace feeds since the second quarter of Monday’s game. If I’m sick of hearing them, imagine how my good buddy Tom feels. He must be a wreck! He must be inconsolable! He must be teetering on the brink of a ice cream bender the likes of which humanity hasn’t seen since Ben & Jerry’s invented Phish Food. We can’t have that. Tom Brady will have plenty of time to embark on any number of wonderful ice cream benders in a couple years. But not now! Not with twelve more games to play, a winnable division to grab hold of and an improbable Super Bowl run to take us all on.

When I’m down, I like distractions. I get distracted and poof, no more sad face for Ryno. So because Thomas and I are such good friends, I thought I’d line out some tasty nuggets of distraction that he could busy himself with as he prepares for this weekend’s game against the Bengals. Oh wait…the Bengals are pretty good right now. Maybe he doesn’t want to think about them yet.

TOM! DON’T THINK ABOUT THE BENGALS YET!

THINK ABOUT THIS STUFF FIRST!

1. The new Gary Clark Jr. album. It’s pretty good, Tom. It’s a live album and is pretty ferocious at times. “Don’t Owe You a Thang” is pretty gnarly. I think you’ll like it.

2. Scandal is back! That shit is bananas.

3. Baseball playoffs have started, Tom. I know our beloved Red Sox aren’t in it, but I’m going to root for the Royals. You should too.

4. Have you ever tried turkey meatballs, Tom? They’re delicious.

5. This band The Wild Feathers are really fun, Tom. I think you’d like them. You know, because we both dig alt-country.

6. Kim and I have started watching Twin Peaks. I don’t know if you ever saw it, but that’s some weird shit right there. I don’t know who the hell killed Laura Palmer, but I know that Kyle MacLachlan’s character is my favorite followed by Lucy, the receptionist at the police station.

7. The eighties were a funny time, Tom. Did you have Hammer pants?

8. Hey Tom, what do you think of this iOs 8.2 operating system? I know you still use a flip phone, but Gisele must have an opinion.

9. What do you think about Common Courtesy laws? Like for instance, no one is allowed to do yard work on the weekend before 10am. Because dude, it sucks when you’re trying to sleep in a little bit and some pud wacker in your neighborhood is replacing his gutters or power-washing his deck. Just think, if Obama made that a law, his approval rating would go through the roof!

10. Have you ever power-washed before, Tom? It’s actually pretty fun.

11. The New Girl has been really good so far this season and I know that’s a relief to you buddy. They really disappointed you last season with the Nick/Jess relationship and the disaster that was the inclusion of Jess’ sister. And we both Linda Cardellini! I think she was just miscast and poorly written for. I know, we hate poor writing. But we love Schmidt! I can’t decide who I like better- Nick or Schmidt. But you’re always right, Tom- why do I have to pick? They’re both awesome.

12. Linda Cardellini is 39 years old. It either seems like she’d be older than that or slightly younger.

14. The new Paul Thomas Anderson movie, Inherent Vice, looks amazing. I can’t wait to see it. I think I’m going to see Gone Girl this weekend. Date night with the wife! I know you’re busy, but we should do a double date soon. You guys like Thai food?

15. Doesn’t it seem weird that the Nationals may very well win the World Series, Tom? Feels like only yesterday they were terrible. Crazy how that happens.

16. Speaking of crazy, the whole Secret Service thing, huh? Of all things to be a thing right now. They better get that figured out before you’re president, Tom.

17. I can’t figure out European soccer to save my life. How many effin’ tournaments do these teams play for crying out loud? I think Everton, you know, the team we decided to root for after the World Cup, is playing a Russian team this weekend. Russian? I thought they only…never mind. It’s all confusing. I guess Everton is okay right now, but they just need to get their shit together and be more consistent. Oh sorry, that was in no way any kind of subtle dig at your Patriots, Tom. You guys will be fine. Everton? I think they just need better defense and offense. Which, well that’s probably not a great thing to say about a team. It’s a long season. They’ll turn it around.

18. Game of Thrones can’t come back soon enough. Am I right?

19. I just feel like it should be called falliage and not foliage. It takes place in the fall. Calling it falliage just makes more sense.

20. I know I’ll never try skinny jeans again. I couldn’t get them past my thighs. But that’s just me.

Tomorrow’s another day Tom. Things will turn around and all of this nonsense that’s been going around this week will be a distant memory.