Home › Television › On Behalf of The Leftovers…

On Behalf of The Leftovers… 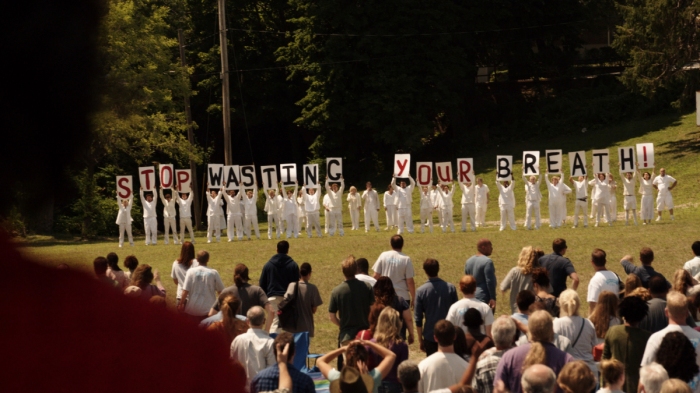 Maybe you’ve made that decision already and maybe you decided to give it a shot. It is HBO after all and they’ve had a hell of a lot more hits than misses. They have capital.

But maybe you’ve decided to watch it only a trial basis or to watch this season and then decide. Maybe you’re making a decision weekly as to whether or not you want to keep watching. Or maybe you decided right from the jump that a show about people dealing with an unsolvable tragedy doesn’t sound like your thing.

These are all good decisions because they are your decisions. So thumbs up for that.

I would like to take a few moments to make a case for either watching The Leftovers or if you’ve been watching, sticking with The Leftovers. I don’t know if I’ll succeed or not. But it’s Friday, my arm hurts and doing this beats reading about the Jon Lester trade. So let’s do this.

Here are four reasons why The Leftovers is worth watching…

It is and it starts with the premise of the show. One day 2% of the world’s population up and vanished. Poof. Gone. No explanation given- just gone. This happens in the first five minutes of the first episode. Babies, moms, grandparents, assholes- one minute they were there, then they weren’t. No move ahead three years and you have The Leftovers. The show isn’t as much about the event, but the resulting world after the event. It’s about dealing with tragedy, dealing with the unexplained. There’s plenty of shows out there about an event. The Leftovers is about after the event and what that life is like. Sure some characters are still bent on figuring out what happened and where their love ones went, but the majority are trying to adjust and get on with their lives- whether that’s aided by booze, nihilism or the cozy confines of a cult. Repercussions are interesting. The Leftovers is interesting.

Led by Justin Theroux as the Chief of Police of the town of Mapelton, New York, the cast of The Leftovers is up to this point, really good. But to be honest, I just don’t know who many of them are. There is Liv Tyler, I know her. Theroux’s character, Kevin Garvey, has a emo daughter at home, an estranged wife in a cult and a step son on the road at the behest of another cult. With the exception of the step son, these are all really good actors giving really bang up performances, especially because Estranged Wife doesn’t talk (more on that in a few.) The reverend is great and the the insurance woman, who lost her whole family, is also good, albeit in limited action up to this point. She’s also Normal Attractive, which is a rarity anywhere in entertainment. But I’m really impressed with Theroux, who seems to be carrying the entire emotional weight of the town on his shoulders and wakes up every morning with a jolt and exasperated sigh. But he could just be tired from working DJ gigs all night.

The cult thing is creepy as…

After the whole disappearance/departure thing, cults began springing up all over the world. Mapleton’s main cult is the Guilty Remnant. They dress all in white, don’t speak and chain smoke cigarettes, all while uncomfortably reminding people that their love ones up and vanished and shouldn’t be forgotten. I’m interested to learn more about the leader especially. Get to episode five and you’ll want to learn more too. And as previously mentioned, Garvey’s stepson is in another cult, this one led by a dude who believes he can hug the pain away and has a thing for Asian gals. That part has really only be flirted with so far, but has done enough to peak my interest. Cults have become such a big problem that the government expanded the ATF (FBI’s bureau of Alcohol, Tobacco and Firearms) to include explosives and cults. This seems to be something that will become more clear and intertwined with the plot as this first season keeps going.

It has a Lost vibe to it

Ultimately, you will decide whether or not to watch The Leftovers. You have plenty of other options. Going outside and enjoying summer might even be one of them.

I will say it’s worth your time though, and that for now at least, it’s a show worth watching.

You should give it at least five episodes.