Dropping Some (notes on) NYC

Some notes:
It’s not walking, it’s combative walking. Just calling it walking would make you think there is some leisure involved. 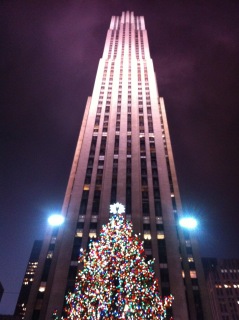 New York City must be a rough place to live if you don’t like to be touched.
Why is the sky blue? Oh, must be the giant M&M.
How is the rental/changing room at the Rockefeller Ice Skating Rink not any bigger? It’s only slightly larger than my office. If not for the warm feelings that the holidays provide, you might be inclined to cut someone.
It’s a little joint indie joint; slick lil’ one off coffee shop and you’ve probably never heard of it. It’s called Starbucks.
For NYC emergency vehicles, it’s probably just easier to respond to an injury on foot.
Went to the Beer Authority, a block from Port Authority for lunch, and liked it so much, we went back for after dinner beers. $7 for a Yuengling & it’s not even rated. That seems a little excessive.
Sadly, opera singers don’t belong on the 11pm train home, even if they’re singing about that night’s boxing match. Even with a voice like a Spanish angel, it’s just not going to be as well-received as you might think.
I don’t think that’s the real Iron Man and nope, the dude dressed up as GI Joe doesn’t work for the city. He just dresses up like an army man. He’s an independent contractor and he’s very concerned that people are crossing the streets safely.
Long Branch? Nope, Secaucus.
It’s never okay to stop in the middle of a sidewalk. It’s even more so not okay if you’re stopping to Instagram something.
NYC, where the same rules that apply to men’s room etiquette are in play- no eye contact, keep it moving and you’re probably going to want to wash your hands when you’re done.