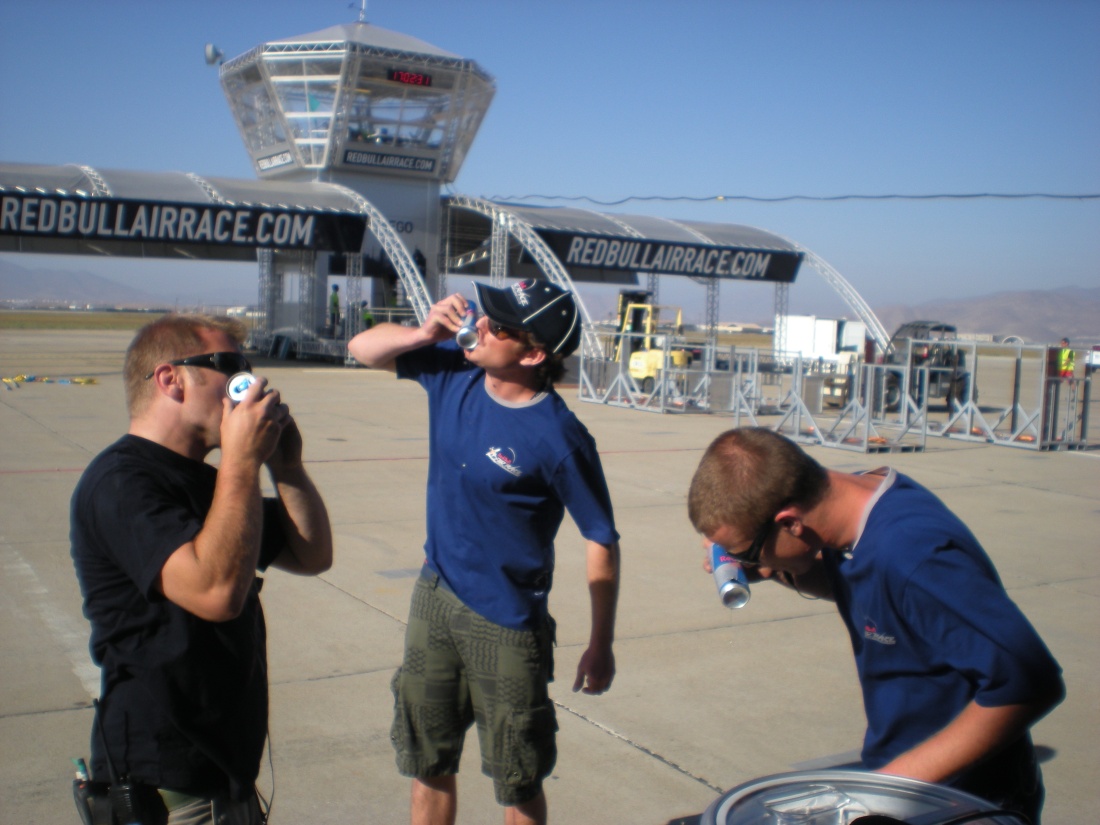 Sometimes you have a morning where coffee won’t cut it, where morning radio is boring, where the clouds are rolling in, followed by rain and wind, afternoon thunderstorms and you’re hours away from kicking back and getting a lit bit closer to finishing the Wire for the fourth or fifth time. These mornings are a part of life, like parking tickets. I wish they weren’t, but I also wish I was taller- that’s just life.

I’d like to go back to sleep, but the floor in my office looks uncomfortable and someone might come in. So I can’t do that. Hold on, I just re-examined the situation. Nope. I can’t lie down.

So I look back, dig deep into memories to put me some place else.

Under the hot San Diego sun, another morning of Air Race fun was under way. At the airport we were operational, shit was live. For the week prior, every day I had a small army of Helping Hands- day laborers, who would show up, looking ragged, and then put to work with some of the frostiest Euro’s I’ve ever met. They were pushed hard, pushed fast and pushed largely without much regard for their well-being. But we had a tight schedule and like this morning right now, that’s life. Sometimes deadlines supersede pleasantries.

On this particular morning, I did not have an army coming in. As we were done with our load-in, my legion of Helpies had shrunk down to only two- two dudes I had picked who seemed less unruly than the others; dudes who didn’t look like vagabonds, could speak proper English and understood when to do, when to not, and when to fade back when needed. So I picked two of my favorites- Brandon & Lloyd. Unlike some of the others, neither had tried to fight one another, so that seemed like a good sign.

They were supposed to be on-site around 7:30. At 7:50, Lloyd called. They were running late. Why? Well that was best explained once they got there. Okay, I said. Just hurry. I probably swore. I was stressed.

Brandon & Lloyd pulled into the parking lot in Brandon’s beat up hoopde. Lloyd was driving; surprising because Lloyd didn’t have a license.

So here’s what happened: Brandon’s brother had gotten out of prison the day before and understandably, the family did a little drinking once he got home. They drank so much that at one point, they found themselves in Mexico. Luckily, they found themselves a way home, which is where Brandon found himself when his alarm went off that morning. So he got up, got dressed and rambled out to his car. But here’s the kicker, Brandon had been nailed for drunk driving a little while back and as a result, had to breath into a machine in order for his car to start. If he had any booze on his breath, then the car wouldn’t start. Well Brandon still had plenty of booze on his breath and as a result, his hoopde wouldn’t start.

Brandon called up Lloyd, who he was supposed to pick up, telling him he had to come over. Lloyd came over, breathed sober, started the car and the two decided it would be best if Lloyd- despite not having a license, drove them to work.

Hence them arriving almost an hour late and when they did, Brandon look like he had been hit by a truck- once in America, once in Mexico and once again in America just for good measure. He told me that yeah he had gotten pretty banged up the night before, but felt fine this morning.

Success as a manager lies largely in the ability to put people in the right position to be successful. That morning, I put Brandon & Lloyd in the one position where I was certain they would not only be successful, but incredibly effective- on a golf cart, in the shade, behind a hangar. They stayed there for most of the morning, Brandon fading in and out of consciousness. Eventually he came around and was very apologetic, but by that time, I had moved on. Other problems had arisen, other fires that needed to be put out. We’ve all been there, I told him. It’s not that you’re hungover that is important, I told him. It’s how you handle that hangover is what’s important to me.

There was no sense in dwelling, no sense in letting the situation bring me down. These are life lessons; these are things we need to do to be successful not just in managing a flying freak show in Southern California, but in managing our lives.

So now a couple years later, I’m telling myself the same thing on a boring & stale Monday morning- no sense dwelling on it, no reason to get bogged down and no point in hanging my head.

Today is today, tomorrow is tomorrow and that’s about the only thing certain in life.