In the seventh inning of the Red Sox/Yankees’ game Wednesday night, Red Sox Joe Kelly plunked Tyler Austin of the Yankees. Kelly’s decision to pop Austin in the ribs was most likely prompted by something that happened earlier in the game: Austin slid into second base and got a little too liberal with the placement of his leg and it’s proximity to Sox shortstop Brock Holt. It was a suspect move and benches and bullpens cleared. Austin was going to get hit, that was all but a guarantee. Baseball is weirdly predictable that way.

So fast forward to the seventh inning and Kelly hits Austin (on Kelly’s second try.) Austin took issue with this and started towards Kelly, who responded in the most Boston way imaginable.

Joe Kelly’s pitching may leave fans divided, but when it comes to his moxie, there is little question there. Wednesday night was the night Joe Kelly became president.

The fight itself was actually pretty good, much more of an actual fight than what usually transpires when a batter charges the mound. Punches were thrown, punches landed, Aaron Judge towered over everyone like the kid on the playground who has been held back for a couple years. 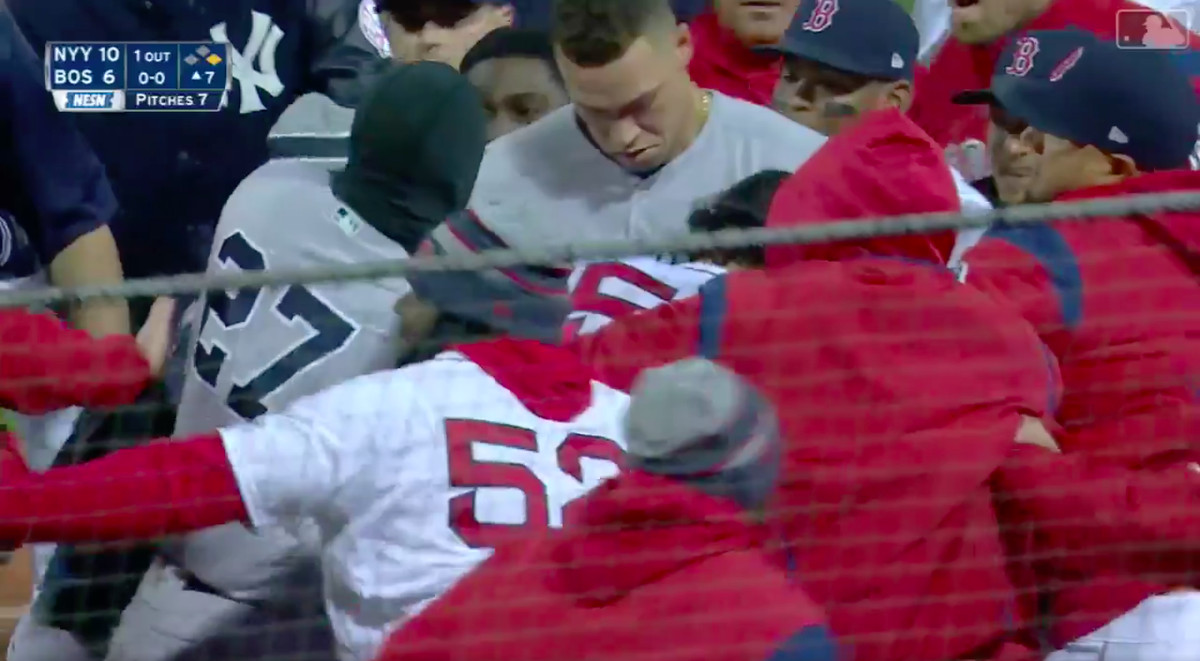 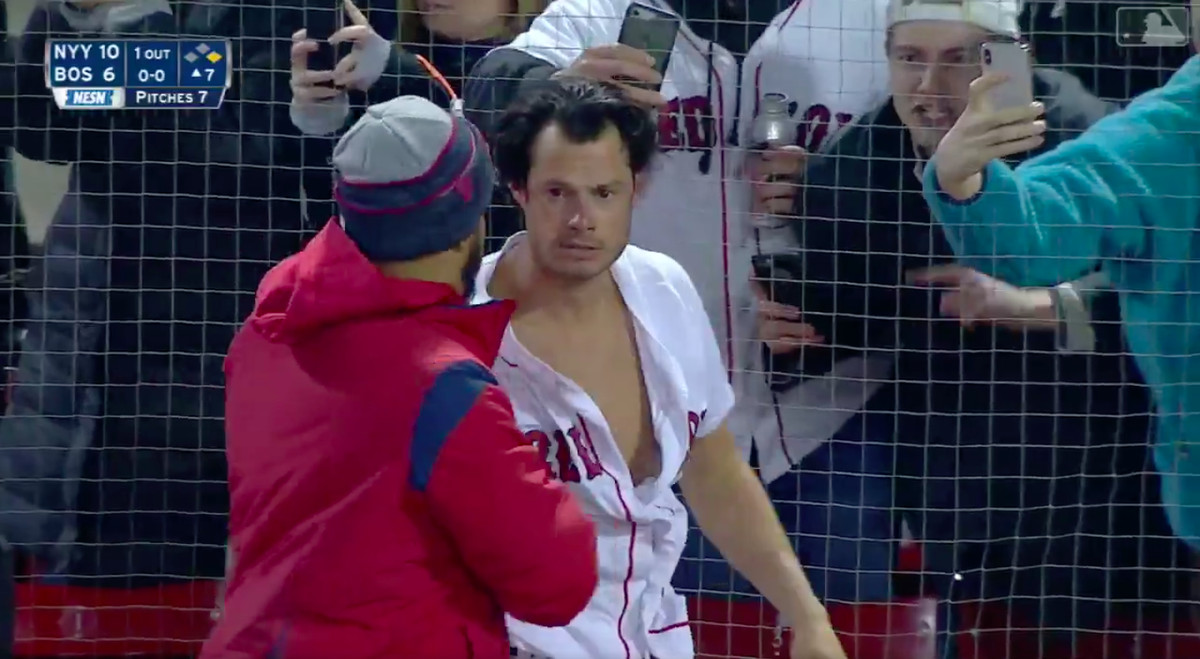 A good dust-up in a baseball game is more often than not pretty entertaining and this one in particular was especially note-worthy as it featured the Red Sox and the Yankees. More than a few tweets quickly went out, announcing that the rivalry was back on, which is good news for everyone. Baseball is better when the Sox and the Yankees are trading blows, trading wins and battling to the end, which looks very likely given the quality of talent on each team and the lack of it on the other three teams in the AL East.

But I would like to take a moment to acknowledge what I feel is the best part of a good ol’ fashion baseball brawl and that’s when the bullpens empty out. When the dugouts empty, sure, it’s fine. But the bullpen dudes charging out is something to behold. These dudes are committed too, willing to drop whatever it is they are doing and run full speed from the cozy confines of the bullpen all the way to the sight of the skirmish, which is more often than not somewhere in the vicinity of the dugout. It always looks like the way it looked in Game of Thrones, during the “Battle of the Bastards,” when the Knights of the Vale came storming in at the last minute, riding en mass and emerging on the horizon. Reinforcements!

All that is missing is the sound of horses huffing and puffing their way across the battlefield. Baseball should work on that, pipe it in via the PA. Theatrics baseball. Never a bad thing. 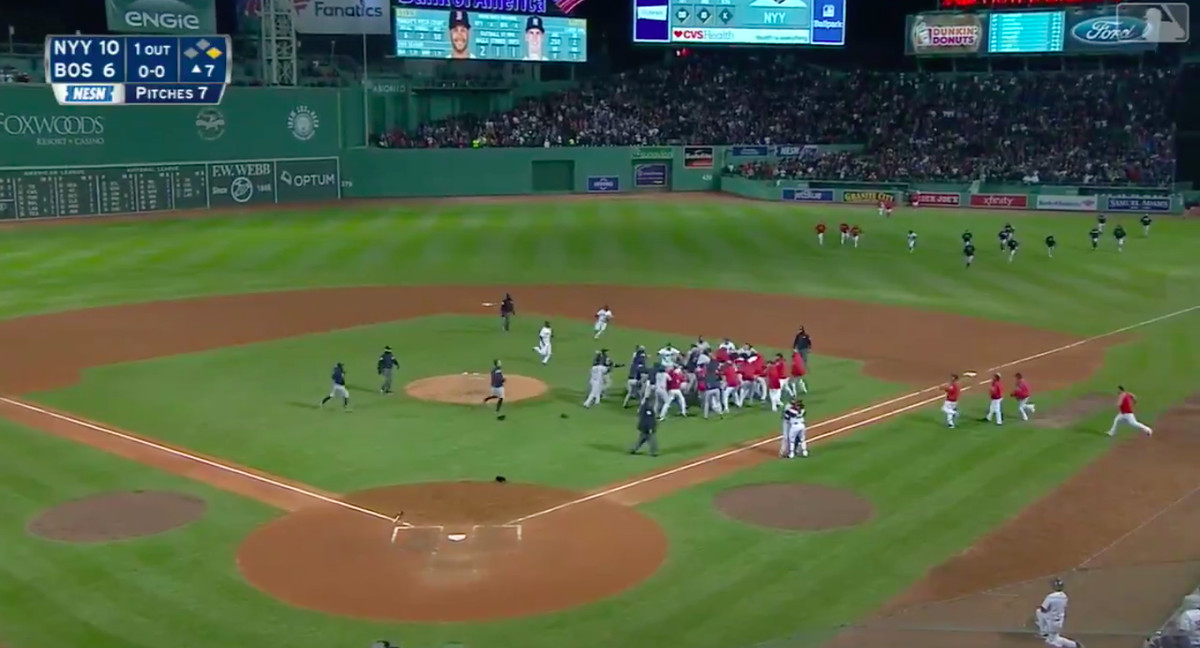 I like picturing the scene inside the bullpen when a fight breaks out, how everyone drops what they’re doing and springs to action. You know at least one dude was in the bathroom and bailed in the middle of whatever he was doing and that man is braver than most.

Who is the one leading the charge of the bullpen dudes? Is there one person or is it an every man for himself kind of thing? I’d have to assume that every team’s bullpen has that one dude who is on the lookout for a brawl and gets everyone ready to rumble when the time comes. It’s probably the bullpen catcher. Someone out there has to be the one who yells “LET’S GET BOYS!”

Likewise, is there always that one dude who pulls a Morgan and would prefer to stay behind?

The Morgan is definitely the one the team looks to unload first when the trade deadline is approaching.

Yes, the rivalry between the Yankees and the Red Sox appears back on and yes, Joe Kelly won’t have to buy a drink in Boston anytime in the foreseeable future and yes, Aaron Judge is freakin’ weirdly bigger than anyone else in professional baseball, but the real stars Wednesday night were the ones rushing in from the bullpen.

They must have been exhausted afterwards.

Kudos to the real heroes.

Like Loading...
‹ Give It Up For My Man NoHo Hank
Ranking the Movies of the Marvel Cinematic Universe ›