Let’s Be Honest With Ourselves About Corn Mazes 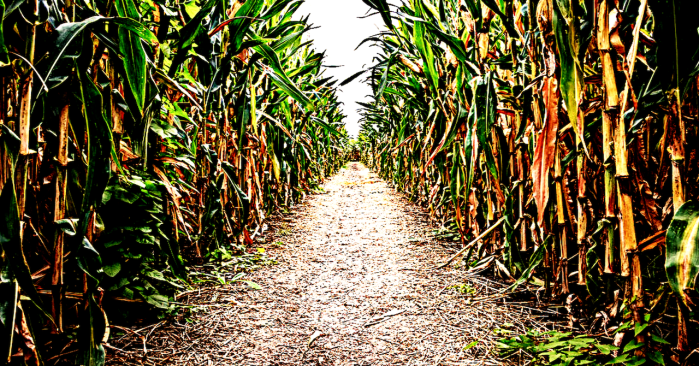 They have become an integral part of any good old-fashioned festive fall weekend, right up there with pumpkin and apple picking, hayrides (both traditional and haunted), and devouring anything pumpkin-spiced. If you’ve embarked on a day trip to a local farm during the pleasant, but flawed fall season then there’s a good chance that the farm has some sort of corn maze. And with that most likely being the case, there’s an even better chance you’ve either dove right in and attempted to tackle it or at least thought about it.

Why wouldn’t you? It looks like fun; looks like a nice way to spend an October afternoon.*

*Although yesterday, I overheard a man in a group headed for a corn maze say that “he wasn’t in the mood for a maze today,” which I thought was an interesting take.

But wait, are corn mazes fun? Are they a nice way to spend an October afternoon? It’s time we seriously ask ourselves these important and seasonally relevant questions.

For starters, when you’re in a corn maze, you’re going to get lost. You’re going to get frustrated. If you consider either one of those two things enjoyable then good on you. I’m not sure you’re human though. Getting lost is the worst. Getting frustrated even more so. And don’t think it’s not going to happen while you’re trying to solve a corn maze. It’s a maze; to frustrate and confuse is the maze’s whole purpose for existing.

Corn mazes start off innocently enough. Those first couple of times you encounter a dead-end can be kind of entertaining; it can really bring your group together in fantastic ways. Who doesn’t love team-building? But wait because soon enough, you’ll hit a wall, sometimes literally. It’ll be a wall of old, smelly hay staring you right smack in the face. You’ll backtrack and then hit another dead end. More hay and then some little kid goes running past you. Somehow that little shit knows what they’re doing and they’ll disappear before you can follow them. More hay and more hay and more hay. The puddles of mud are a fun extra bonus.

If things really start to fall apart, all you can do is pray you have cell service.

You probably won’t though.

Fast forward a bit and you’ve managed to conquer the corn maze. Congratulations. However, somehow an hour has passed and the line for pumpkin-flavored ice cream is even longer than it was when you entered the maze. Talk about an immediate L after a hard-fought win. Plus, you still need to pick out some mums and had harbored sweet dreams of getting your face painted. It’ll be tough to get that accomplished now with all the time you spent adventuring through the fantastical corn maze. Also, one of your shoes is wet. The other one isn’t. It’s yet another corn maze-influenced mystery.

You go into a corn maze though, you come out empty-handed. If anything, you have some hay in your socks, but that’s about it. Don’t sell me on a sense of achievement. What did you achieve? You navigated through a maze of corn, something you chose to do. There isn’t any kind of sense of achievement there friend, just a sense of muted accomplishment, nothing to get pumped about and certainly not akin to coming away with a giant pumpkin that is shaped perfectly for carving or more apples than you know what to do with.

Well, if they’re Golden Delicious, then I like them very much. Thanks for asking, Matt Damon as Will Hunting.

But for a moment let’s play along and say corn mazes are fun. Corn mazes are your thing (or in the case of the fella from yesterday, something you are in the mood for.) Great. I’m happy for you.

That would then pose a whole new set of problems because the sad truth is that there is quite a range in quality when it comes to corn mazes. Corn mazes may in fact be terrible, but a subpar corn maze is definitely terrible.

If you’re a corn maze purist then I would venture to think that the majority of corn mazes out there are not up to your standard. They are too short, they are too easy, they are too crowded. They’re disappointing and being disappointed doesn’t sound like much fun to me. (It’s right up there with getting lost and getting frustrated actually.) And it probably doesn’t sound fun to you either. Do you know what that sounds like? It sounds like the harsh reality of corn mazes not being fun rearing their ugly head and causing a ruckus in the other room.

An argument in favor of corn mazes could probably be made by the pro-corn mazers out there and would be based around the design element of corn mazes, how they can be made to resemble something or someone. Wow, that’s great.

Question though, how can I even tell that from the ground? Oh, I can’t. Cool. Then the design means nothing to me.

Now I’m sure there are corn maze fans out there. There has to be. Farms and orchards wouldn’t continue to plow through corn fields just for kicks. I saw it with my own eyes yesterday, groups and groups of people happily trudging into a corn maze and for the most part, returning with big smiles on their faces. I elected to stay behind and didn’t regret my decision one bit. Actually felt pretty good about it.

Yet just because I’m not on board with something doesn’t mean everyone else isn’t (see: Pumpkins, David.) I realize that and know all too well that I’m not speaking for everyone here when I make my case against corn mazes. It wouldn’t be the first time I’ve taken a stance that isn’t popular or mainstream and it definitely won’t be the last. Christmas is coming up and I have plenty of thoughts about Christmas movies.

But with that being said, corn mazes aren’t fun. Corn mazes are at best just okay and at worst, absolutely terrible.

Go on now, mess around with a corn maze. I’ll be sitting pretty, eating some pumpkin ice cream, and people-watching, which is something I’m always in the mood for, regardless of the time and place.

Like Loading...
‹ The Five Best Things About ‘The Departed’
Easy Morning Rebels: The Best My Morning Jacket Songs Ranked ›