Home › Sports › Field Trip: Where Brooklyn At? In New York.

Field Trip: Where Brooklyn At? In New York.

Bussed it into Brooklyn last night- second Nets’ game I’ve seen both ever and at the Barclays Center, which I can happily report still has that “new arena smell.” I cannot happily report if said smell is a good thing or a bad thing. I think it depends on the person.

The Spurs were in town.

The Spurs top four players were not suited up.

Right off the bat, a lesson was learned- don’t plan to see a Spurs team at full strength unless it’s in the playoffs. Between injuries, old age and Gregg Popovich’s frequent desire to stick it to the league, you just never know what kind of Spurs team you’re going to get. As soon as I saw that they squeaked out a win in Washington in double overtime Wednesday night, I knew the chances of getting to see one of the Spurs’ marquee names was a long shot.

And I was right. And because I was right, I also learned that the Spurs defy even more odds by having not one, but two pasty white dudes on their team, both with face masks on. That has to be some kind of modern record.

The game was sloppy, kind of boring. The Nets won, even though the short-handed Spurs made it interesting a couple times. It was down right heart-breaking and sad to see Paul Pierce and Kevin Garnett in a jersey that wasn’t a Celtics’ jersey…and my apologies to Jason Terry, but no emotions were felt upon seeing you…on the bench…because you didn’t play…at all. Nice tattoos, though.

It was the same Pierce, though- all elbows, pained expressions and improbable shots. Can we steal Kickstarter away from poor musicians and filmmakers for a few weeks to raise some cash to get Pierce back to Boston for at least one more year? It needs to happen. It has to happen. You get the feeling that clouds and decades of bad karma are on the horizon for Boston if this doesn’t happen. Locusts, plagues, Yankees’ victories. All possible.

Of course the Nets’ PA announcer is a ratty white dude with dreads. This somehow makes so much sense.

Andrei Kirilenko is absolutely terrible at basketball these days. Errant passes, bad shots, an ill-advised haircut– why is this guy even on the team? Kind of makes you have to wonder how bad Jason Terry and Reggie Evans have to be to have their minutes swallowed up by AK 47.

Found a great spot for affordable eats & brews right around the corner from the arena- 67 Burger. Good burger and $4 drafts. Not sure they paid their heating bills, though. Place was freezing.

I don’t know what the hell this is… 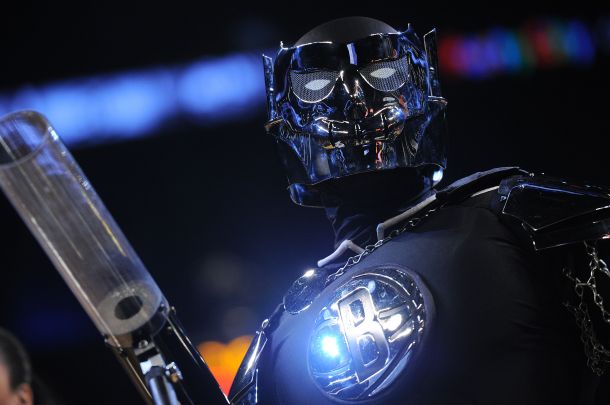 Back to basketball, the Nets have second round playoff loss written all over them. They’re slow and clunky. A better team (i.e. the Pacers or Heat) will run all over them and close them out in five games tops. I still think LeBron on the Nets would be the absolute best/most necessary thing to happen to the Nets to help them stay relevant once the shine and shimmer of their newness and freshness rub off.

But that freshness has yet to rub off and there is a certain kind of special feeling that comes across upon entering the Barclays Center- so new, so fresh, so loud, so subtly classy looking. And that’s before the older women checking bags tells me I look cold and then offers to warm me up. You feel like you’re really someplace, not just at another arena somewhere in America.

So it has that going, which is nice.

Because it very well could be all it has going for it in another year or two.

But until then, where Brooklyn at?