What Not to Do in the Midst of a Zombie Attack 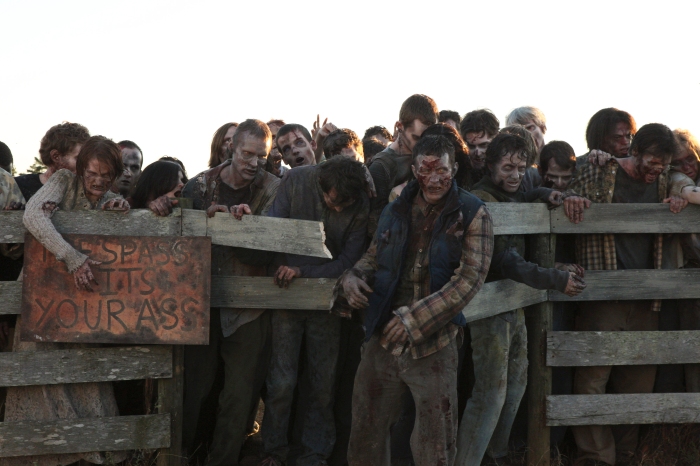 As a man who appreciates logistics I have to say that frankly, the last episode of the second season of The Walking Dead drove me crazy, absolutely crazy. The emotions I felt would have kicked frustration to the curb.

If you haven’t seen the episode, the first twenty minutes are chaos. A herd of walkers descends on the farm, prompting the survivors to scatter and run away. Neither of which they do especially well.

Let’s say you were in a farm house, much like Hershel’s, and a herd of walkers came a calling. I could give you a list of things you shouldn’t do, which is exactly what the World’s Most Annoying Group of Survivors did.

What NOT to Do When Escaping a Zombie Invasion:

Because studies have shown that panicking and/or yelling a lot actually increase confusion, which is never a good thing, but is especially troublesome when escaping a herd of walkers.

2. Start Running Around in Circles

Because you are literally going nowhere, just in circles.

3. Spring Into Action Without Forming a Plan

Because it will lead to you running around circles, which we just pointed, literally means you are going nowhere. Just in circles.

4. Make a Break For It Without Designating a Rendezvous Point

Because if you do escape the zombies, you’re left wondering where the hell is everyone and if everyone made it out safely- which can lead to sleepless nights and whiny kids in cowboy hats getting sassy with you in inopportune times.

Because bullets, unlike zombies, are in short supply.

6. Drive Towards the Zombies

Because the zombies you are trying to escape from are in a herd, which according to the Merriam-Webster dictionary means, among other things, undistinguished masses. Masses, i.e. something that would be hard to drive a car through. You wouldn’t drive into a herd of a cattle would you? No, no you wouldn’t.

7. Stop Your Vehicle Amidst the Herd

Because then you’re in even more trouble than when you were most likely driving towards them.

Somehow the survivors escaped, with only two of Hershel’s Kids With No Names and Few Lines not making it out and Andrea getting left behind before escaping into the woods and having her life saved by a samurai, which may or may not be indigenous to Georgia. I’m not sure.

For good reason, the group, once they were able to meet up, started questioning Rick’s leadership. He then freaked them all by admitting he killed Shane and proclaiming the group was no longer a democracy (which I’m not sure anyone thought it was in the first place.) Now while true, everyone was sick of Shane and kind of freaked out by him as he became more and more of a loose cannon as the season went on (this can happen when stuck in the same place for an extended period of time,) they took this pretty hard- because you know, no one’s motives on The Walking Dead make any sense whatsoever. Not even in the upside down world of a zombie apocalypse do they make sense and that’s saying something.

Oh and Carl, please shut the hell up.

Now I’ll stick with the show and dive into season three. It’s entertaining enough to keep going and I’m curious to see what happens next.

But so hell me God, if they exhibit such a blatant disregard to even the simplest acts of logistics, we might have problems.

Tags: come on, logistics, rendezvous point, running around in circles, shut up carl, the walking dead, things not to do, walking dead, zombie apocalypse, zombies