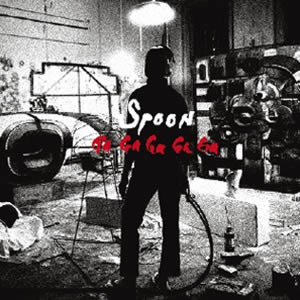 There are few things in the world that match the pleasure derived from discovering a new band. It’s like finding out one of your neighbors is Questlove (almost happened) or finding any sum of money over a buck in your pocket (doesn’t happen enough.) And then it’s a bonus if this band you just discovered has been around for a while- giving you a treasure chest of music to get into instead of zealously burning through their one album in a day and a half.

Last night I spent about an hour trying to update my I Phone and in the process, added some music to it from Future Wife’s computer. One of the bands I added was Spoon. I had heard about them plenty and when they came on the radio and it was pointed out to me that it was the Spoon, I seemed to always make a mental note that maybe I should give them a listen or two and see what they’re all about. But I never did. It’s like whenever Morphine is played on the radio and it’s immediately accompanied by the following thought: I should listen to Morphine more. But I never do.

So I spent the first hour of this quiet Friday listening to Spoon’s Ga Ga Ga Ga Ga and while I feel kind of like an idiot just typing the album name, I feel like a champ for having put it on. This is a great album. It’s like if Billy Joel had balls. Great melodies, splendid beats and the occasional horn arrangements. I’m a sucker for horns- probably one of the reasons that I A) love Rustic Overtones so much and B) was so initially bummed with New Way Out and it’s lack of horns (replaced by strings and synthesizers of all things.) What can I say? Horn sections put a smile on my face.

This is a great way to end what has been a tumultuous week. The week started with a mild and seemingly undeserved hangover that led into the dismal fart sandwich that was the Super Bowl, followed by ESPN giving Eli Manning credit for everything just short of curing cancer and Boston sports fans questioning the immortal Tom Brady. It wasn’t pretty. The hardest part about leaning on sports radio so much to get through the work day is that when something bad happens to one of your teams (Patriots: losing the Super Bowl, Red Sox: everything from August 18th to the present, Celtics: old age and failed trade attempts) it makes it incredibly hard to listen too. Sure you can turn to politics, but how many times can you listen to the following analysis:

The rest of the week wasn’t tragic, but it certainly wasn’t cupcakes and rainbows either. After four tries I was finally able to get a flu shot and it made me feel weird, it took me over two hours to get home Wednesday night because of a little rain/snow and Thursday felt like Friday leading to the eventual disappoint every time I realized it wasn’t. No car crashes, just lots of bummers.
These kinds of weeks are going to happen. They have to. It’s life. If life was only comprised of good times then how would we even know how good we had it? I think we need to get slapped in the face every once in a while. We needed to get knocked down, so that we can learn and appreciate the pleasure that comes with getting back up and regaining your footing. How we cope with these weeks is how we find out what we’re really made of and like with anything, coping mechanisms come in a variety of different forms. Some people drink, some people run marathons, some people find fun new bands to listen to. In the end, it doesn’t matter how we deal with shit, only that we did. Appreciating the process is for other things- like baking or fixing a clogged shower drain. When it comes to digging yourself out of the dumps, all that matters is whether you did or not and if you’re in a better place now.

So we’ll put a cap on this week and move on. We’ll listen to Spoon more and start concentrating on college basketball. We’ll think summer and buy cheap wine at Wegmans. Next week is miles away and could be action-packed, action-lacked or action-sacked. Erin is about ready to pop, so we have a baby on the way and you can’t beat a good Valentine’s Day dinner with your Future Wife.

Life might not be at the Life is Good stage. At least not today. But it’s at least at Life is Coming Along and that isn’t too shabby.